Finding a creative place...inspiration...light and subject


When I find myself at the beach, I find more time for creativity and time to explore processes and subjects on my iPhone. When I view other photographer's images I get ideas...that I can interpret in my own way. The hydrangea images were inspired by a fellow photographer Sue. She posted on her FaceBook page a beautiful shot of her hydrangeas in a ball jar that was simple and finely processed. So.... while I was at the beach with a little time on my hands...I gathered a few hydrangeas and put them in a blue vase and began to play...but it was late in the evening and I had no natural light. I was trying to get something out of the Hipstamatic flash even trying to diffuse the light but didn't come up with anything I found acceptable. However the next morning the hydrangea vase was on the breakfast table and as I looked out to the back porch in the soft shade I thought, perfect light! So I took the hydrangea vase out on the table and made a few shots. Then began to process one or two until I came upon an image I liked. What could be more classic in art than flowers in a vase? All the painters had their version~ VanGogh~Sunflowers Renoir~Garden Flowers ~ Cezanne ~ Chagall they all did a vase of flowers....a classic subject. By no means am I saying these images are worthy of that fine group of painters! but I was very happy with the results! Give it a try!
Later that evening the light was bright on the back porch but not direct, it was the golden hour, so I took the vase out once again and made another slightly different composition. The golden light made the frosted glass table glow golden, and I enhanced the glow with a filter from Mextures.
While I was making the composition of the hydrangeas in the vase, I noticed how lovely the petals looked in the evening light and composed a shot looking down on the flower heads. Then experimented with different processes to bring out the beauty in the petals.


When I was in Ireland with Peter Cox on tour with my photo group, Peter suggested a new app Koloid. It had just launched on June 2. I am always up for a new app..so I downloaded it, tried it out and said it had potential, but I would like the app to allow you to import photos from your camera roll instead of having to shoot with the app. I wrote a note to the developer and ...so today it came to be! They still have some work to do...but there are a few options which are cool. Cropping works best with a square format image like Hipstamatic or 6x6 but also works with 6x7. If you shoot a full 2x3 orientation app like Camera Plus be prepared to throw or crop some away. Also it works best with Vertical orientation images instead of landscape. When I first saw the results of the app they reminded me of the images my dad had taken with his camera during WWII. The developer's site says it was..
"Inspired by 19th Century collodian photography." I love this app for the unique look and the fun interactive developing process...Call me crazy. I selected a few images from Ireland to process. I applied no other processing to the images here so you could see the results of what I achieved with the app. 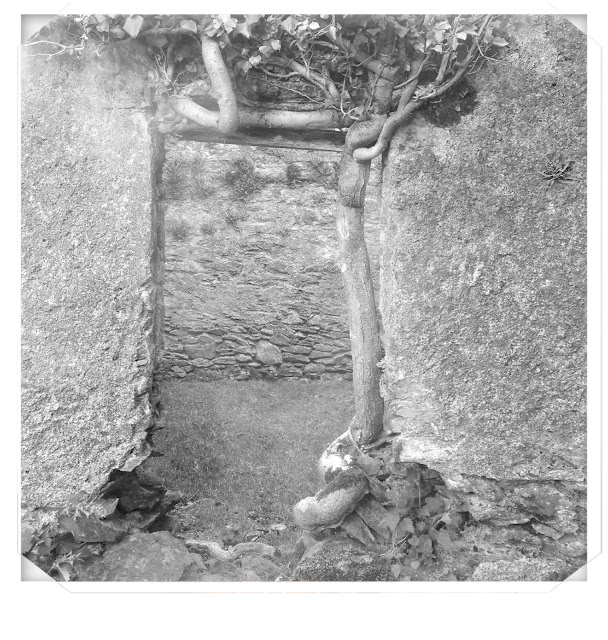 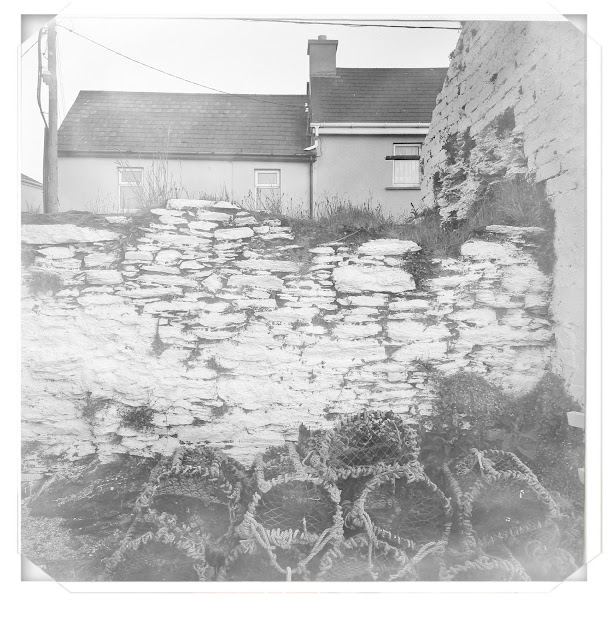 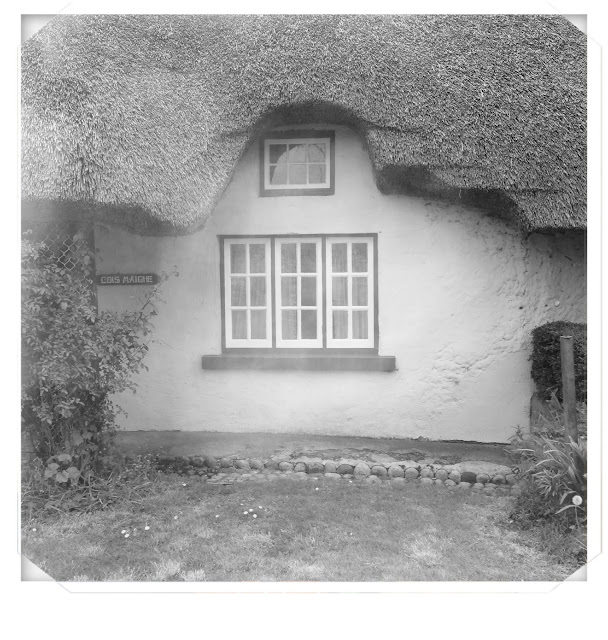 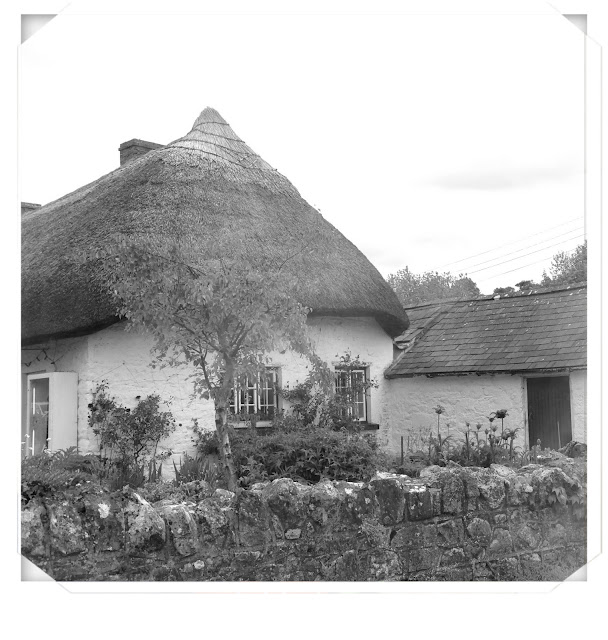 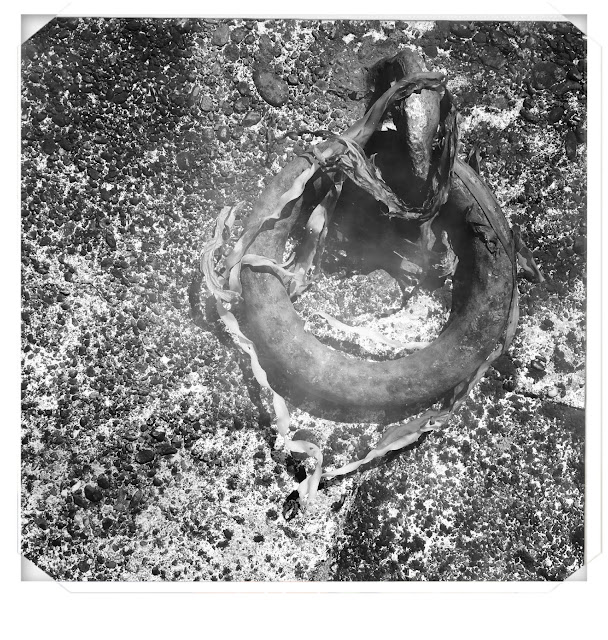 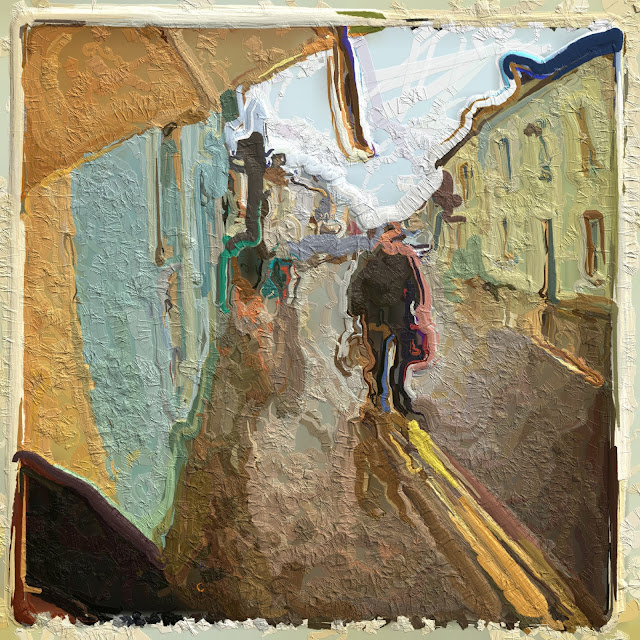 During a quick stop in Bantry in the "pissing" rain, as the Irish say...I had some iPhone fun! With my umbrella in hand I made a quick run through the side streets and harbor front. All these shots were made using the Olloclip, fisheye lens mounted on the iPhone 5. I loved the distortion I could achieve and using the fisheye allowed me to express an element of humor in the images. It was not easy shooting as the rain was quite wind blown and I had to keep wiping the Olloclip lens off with the very handy microfiber sac the clip comes in. It would have been impossible to use a "big camera" in the windblown rain!
The opening image was a happy accident, as I was holding the umbrella with my chin while grabbing a shot, I inadvertently caught my umbrella and arm in the shot. When I posted it on FB asking for opinions, people liked it! So there it is...my view from under the umbrella. 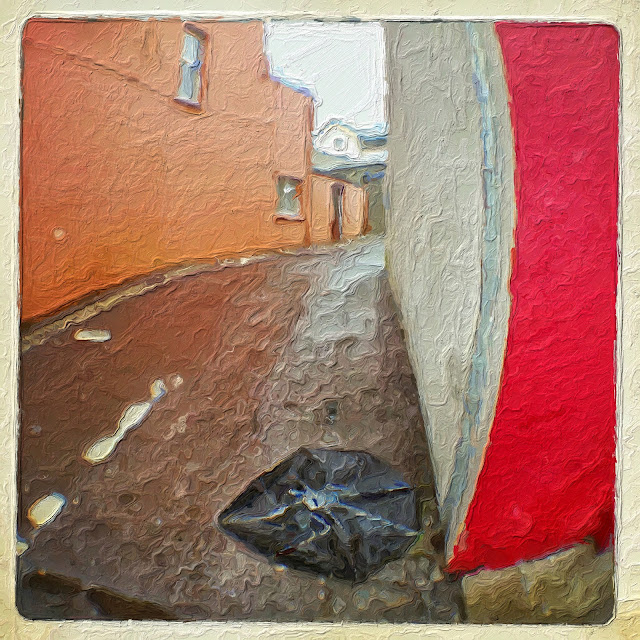 All the images here were captured using Hipstamatic, Jane Lens and Inas 1969 film. The processing was all done with Glaze, Snapseed and Image Blender to add in different iterations, masking and blending to get the final effect. To maximize Glaze processing, I engage the tool feature in the app to come up with really different looks from the standard effects and I have bought all the in app looks which expands the options for different effects. Yes maybe I am a frustrated painter! I wanted to keep this look going and used it through out the trip in different towns and on objects. Join me on August 10 at Union Station in Washington, DC for an iPhone class sponsored by Capital Photography Center. Click here for more info and registration.... Or join me at Horizon Photography Workshsops in Chesapeake City, Maryland for an all day iPhone Class on July 13, Click here for more information and registration. 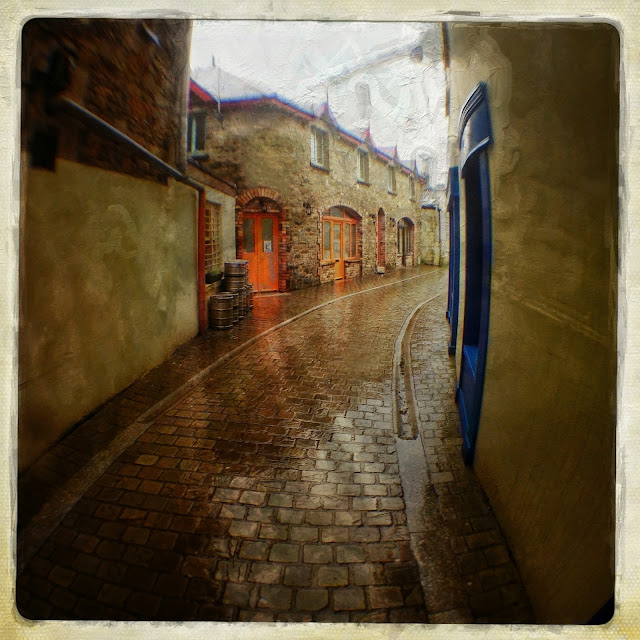 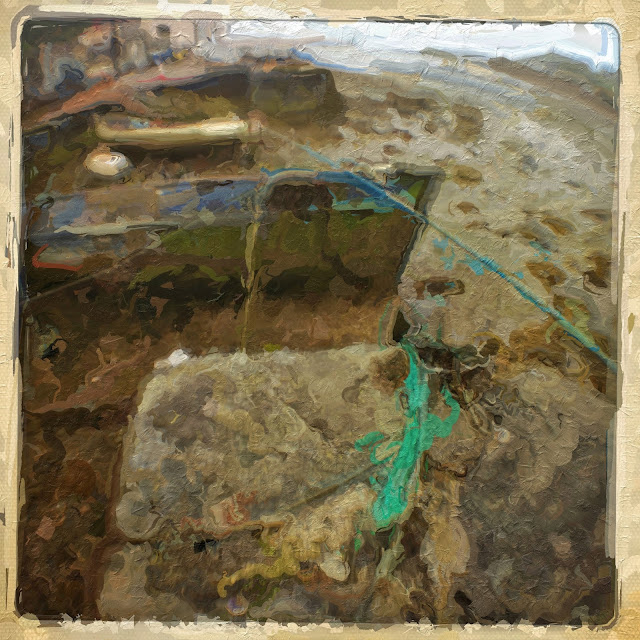 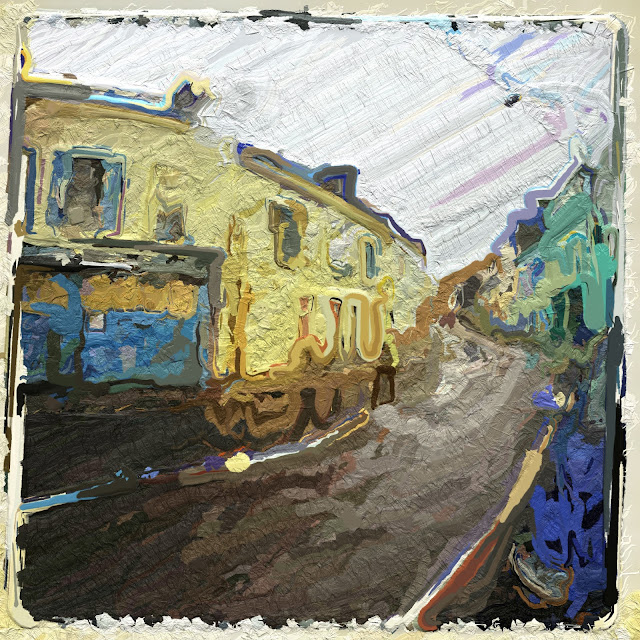 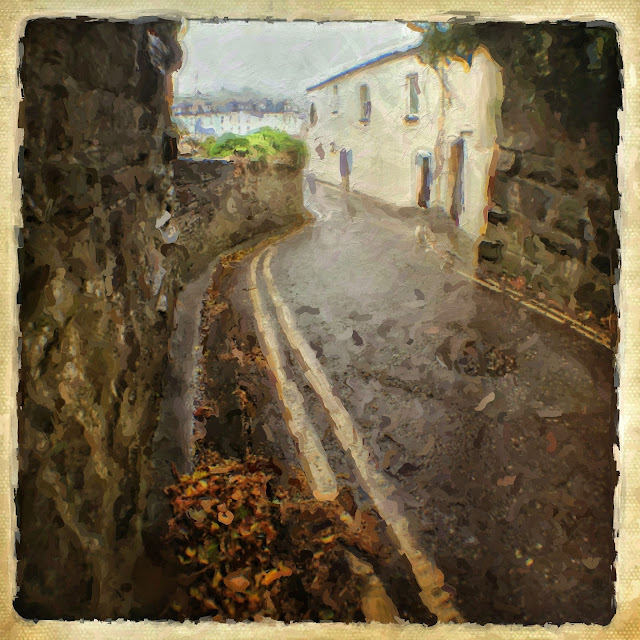 My iPhone and I, loved Ireland for its colorful architecture, curving narrow roads, and seaside towns. Portmagee is a small town in the South of Ireland. We stayed there on our photo tour with Irish Landscape photographer, Peter Cox . Portmagee is a jump point to the Great Skellig Island, one of our destination shoots with our big cameras. In between shoots and meals I explored a few streets in town with my iPhone.We had an unbelievable few days of glorious weather, blue skies, mid seventies and always a sea breeze. Join me on my next full day iPhone Photography Workshop in Chesapeake City, Delaware on July 13 Click here for  more info and registration. 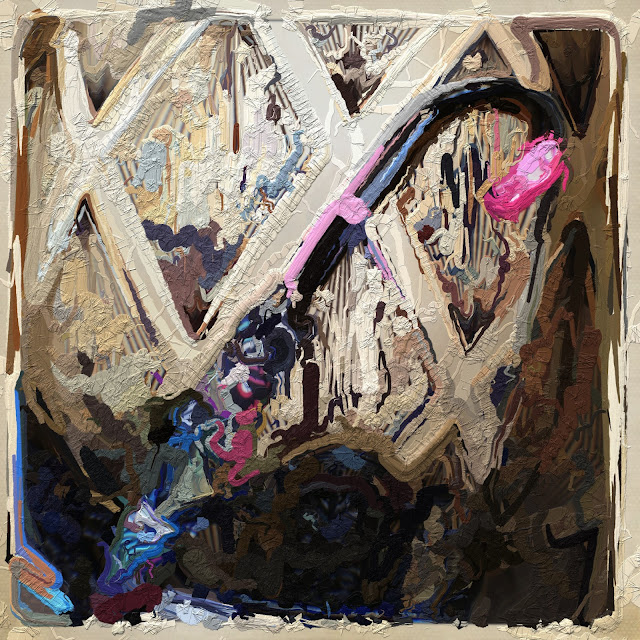 Before I left for Ireland I came across a combination of apps and accessories I really liked. It suited my aesthetic. When I  was in The Lake Hotel in Ireland, the process evolved to include the distortion of the Olloclip. My subjects varied from umbrellas at the front door in a stand, seating arrangements, chairs to candelabras on a baby grand piano. I ran around the hotel between meals and shoots, looking for as many interesting chairs in the public spaces as I could find. This hotel is beautiful and the furniture is lovely. So my eye for interior design was on cue.
The process is simple: Shoot Hipstamatic, Inas 1969 and the Jane Lens with the Olloclip fisheye attached. Then open the image in Snapseed for adjustments to tone, saturation, sharpening selective adjustments and structure. Run the Snapseed file into Glaze and make several iterations...then combine with the original image and several of the Glaze iterations in ImageBlender. I landed on the look I liked for that specific image using this process. Join me July 13 at Horizon Photography Workshops in Chesapeake City, Md for a day long adventure in iPhone Photography! For more information Click Here 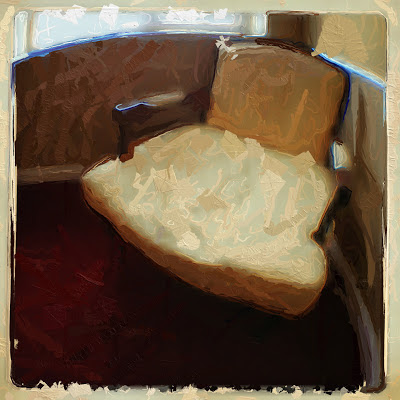 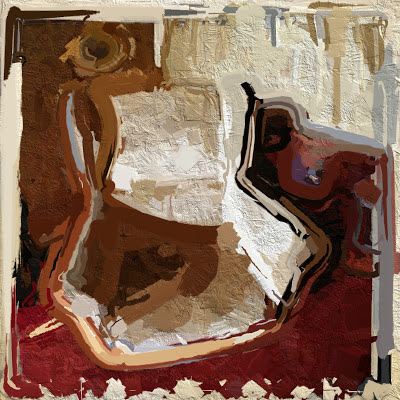 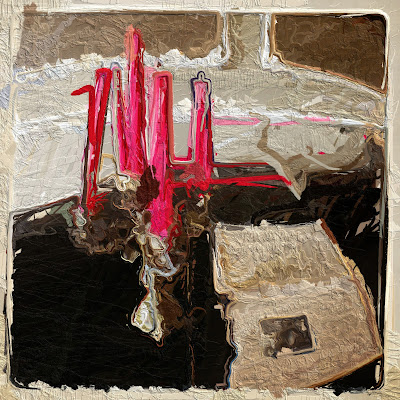 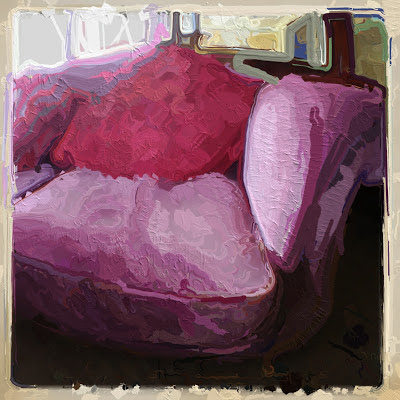 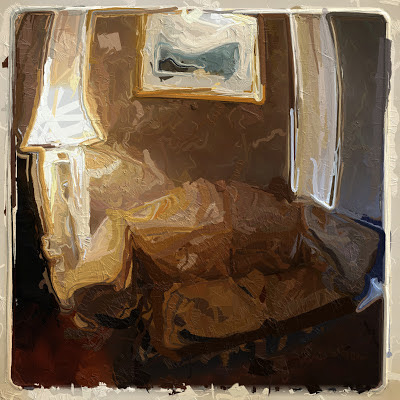 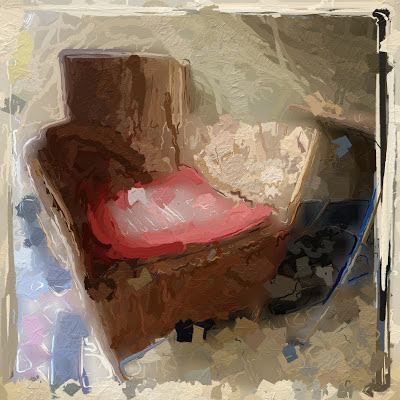 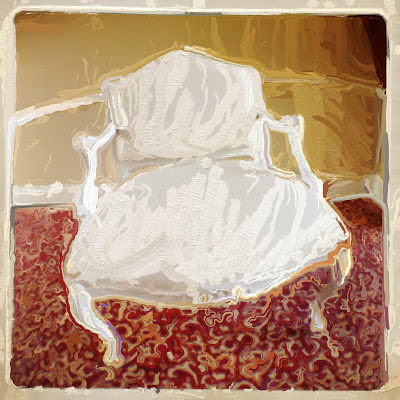 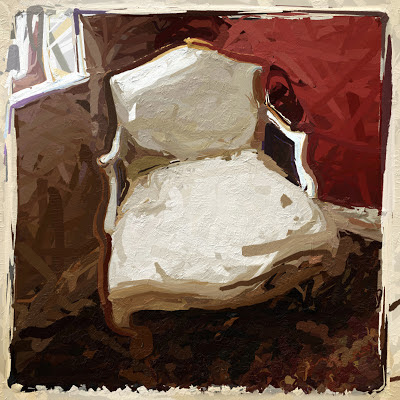 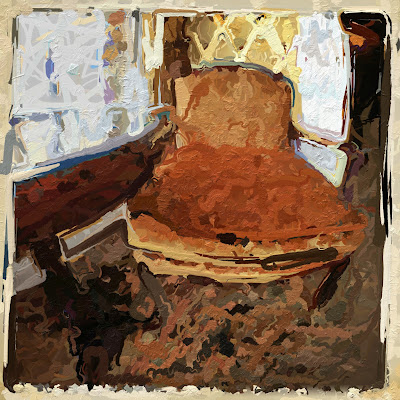 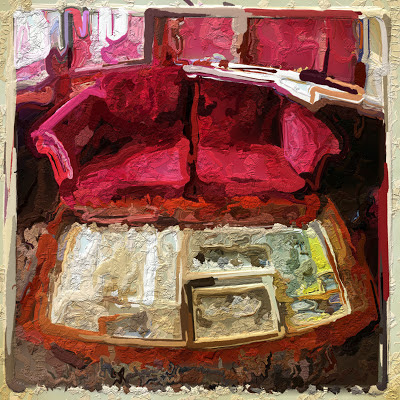 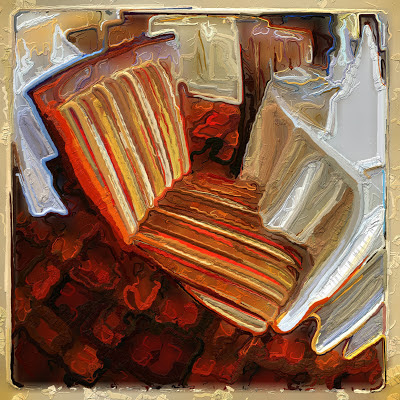 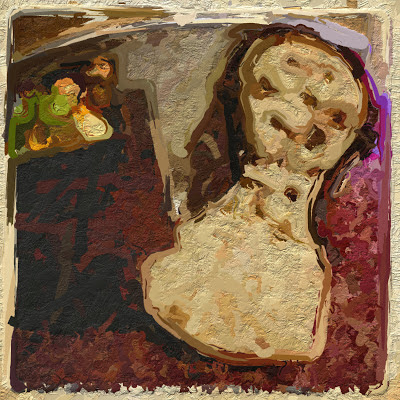 Interested in learning to capture images with the iPhone?

Please feel free to contact me for tutoring in iPhone photography and processing your images with many fun and unique apps. karenmessick@aol.com

Book: Barcelona in Black and White

Barcelona in Black and White by Karen L Messick

Just click on the image above use the discount code KarenM and save on your purchase!

Just click on the image above and search Karen Messick.

Check out my interview here with Geri from iArt Chronicles.

My Interview by iPhone Photography School